TG Green is somewhere i always wanted to see from when i very first started out doing this and so glad i got to finally make the trip. what an experience it was to be inside the building, this place is like a maze! a few times i almost got lost and as you can image its a large creepy place and the ginger cat that kept following me around didnt help!

The original pottery was founded in Church Gresley, South of Derbyshire near Swadlingcote by Henry Wileman in 1790. The small scale business employed around 50 men to produce rough pottery from local clays. Later the pottery was taken over by Thomas Goodwin Green in 1864 who brought fame to the brand name TG Green and subsequently built an empire from his business. In 1871 Thomas Green decided to expand the business by producing white earthware which required the build of new and more modern works.

T.G Green is situated 35 miles from Stoke on Trent which in its heyday was the centre of pottery making in the U.K. Consequently the factory relied on self sufficiency by employing an entire workforce to produce its own brick clay, extracting coal from its own land and a lime kiln built to manufacture its own lime mortar. Additional to the labour employed in the milling of raw materials, craftsmen such as carpenters and blacksmiths were employed to help in the making of stilts, glazes and Kiln furniture.

In 1911 the steam powered machinery was replaced with electricity which was installed to power all units. TG Greens made popular the collectable ‘Cornishware’ range in 1924 which was the shortened name for Cornish Kitchen Ware. The design featured a simple and elegant blue banded white inspired by the Cornish Coast and adorned saucers, teapots, bowls, cups, plates and just about anything that could be used in the kitchen. In 1955 a 30% purchase tax was placed on all pottery products which was to be the beginning of a gradual decline until 1965 when the company went into receivership.

The receiver managed to sell the remains of the company, and so it was sold onto various different people including Mason Cash who purchased the company in 2001 and went into liquidation in 2004. Fortunately The Table Top Company decided to purchase TG Green and production was relocated. The derelict factory to date remains like an abandoned ghostship, robbed of its former workforce yet still packed with unfinished pottery, transfers and moulds. The old works still houses four beautiful bottle top kilns has now been placed on the historical buildings at risk register by English heritage. 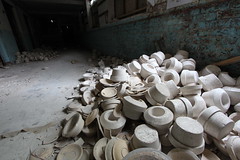 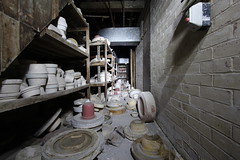 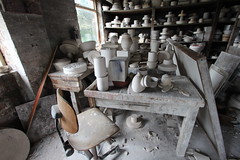 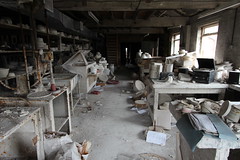 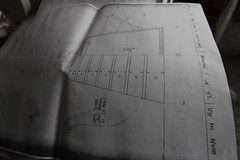 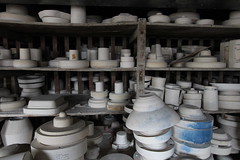 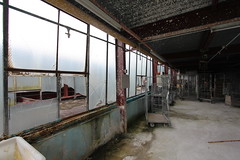 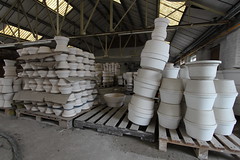 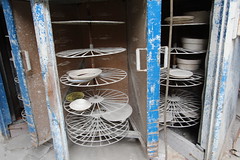 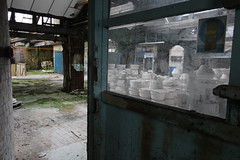