visited this place on my own after seeing someone else do it as i know i was going to be in the area in the next few weeks, but by the time i had got there metal thief’s had been in and stolen all the lockers from both of the rooms, and there was a lot of them. but still a nice place to have a wander around even with the lockers gone.

This is the youngest colliery in the neighbourhood, having commenced operations for the Ashington Coal Co. Ltd. in 1934. The shafts, which are situated comparatively near to the coast, are two in number, and both were sunk to the High Main seam level, which is 486 ft. from the surface. The downcast (No. 1) is 18 ft. in diameter and is used for coal-raising on two shifts per day, and the upcast, which has a diameter of 15 ft., is used for ventilation and emergency manriding only.
The seams being worked are the High Main, the Diamond, the Main, and the Yard. Each of these seams shows practically the same nature of roof and floor as throughout the two neighbouring collieries and the distance between the seams is also comparable. They are, of course, found at slightly greater depths at Lynemouth, the Yard seam, for example, being 660 ft. below the surface near to the shafts, as compared with some 300 ft. at Ellington.

Pithead baths in Modern Movement style. 1938 by FG Frizzell. Vacant for 19 years and subject to vandalism. Future of the overall site continues to be in doubt, particularly since closure of associated Ellington Colliery in January 2005. 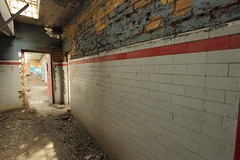 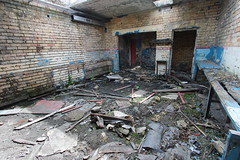 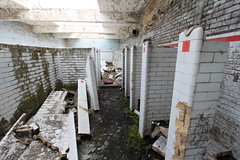 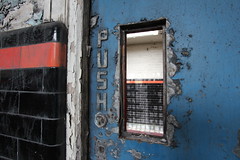 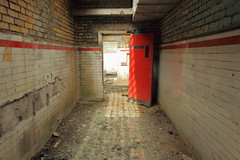 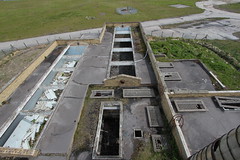